Q. 51: What is the role of testers in Iteration planning?

Testers make a valuable contribution in the following activities:

1) Participating in the detailed risk analysis of user stories

2) Determining the testability of the user stories

Q. 52: What are the testing related issues addressed during Release and iteration planning for development activities?

1) The scope of testing: Extent of testing for those areas in scope, the test goals, and the reasons for these decisions.

2) Testing team: Team members who will carry out the test activities.

4) Functional and non-functional test activities: Timing, sequencing, dependencies, and prerequisites for these activities.

5) Risks: The project and quality risks to be addressed

Q. 53: What are the traditional testing principles?

1) Testing shows the presence of defects

Q. 54: What is the difference between Traditional Testing lifecycles and Agile lifecycles?

# One of the main differences between traditional lifecycles and Agile lifecycles is the concept of very short iterations. Every iteration produces working software which delivers features of value to business stakeholders.

# All these iterations are highly dynamic. Development, integration, and testing activities take place throughout each iteration, and with considerable parallelism and overlap.

# Testing activities take place throughout the iteration and is not a final activity.

# Broad comparison between agile models and traditional models is given below. 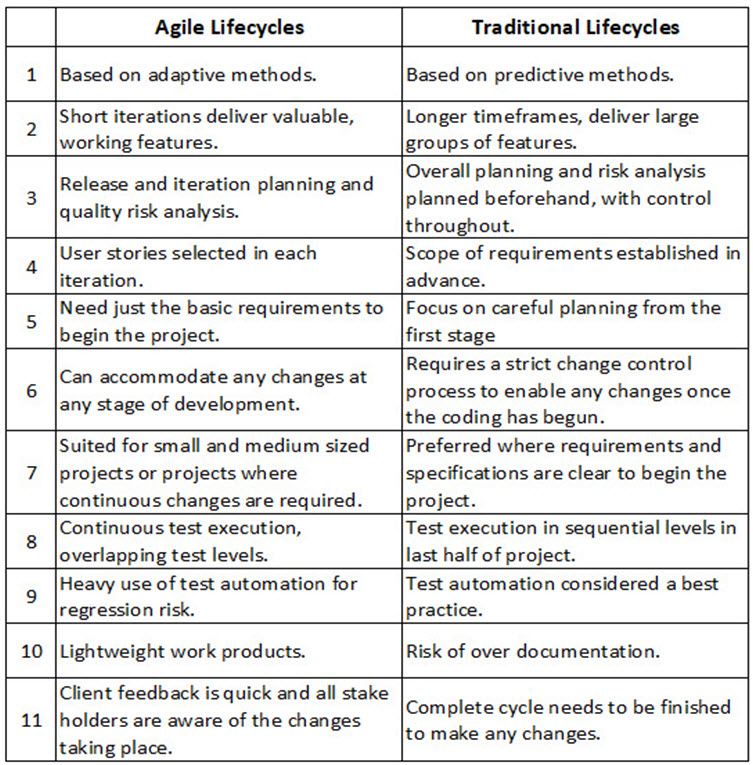 Q. 55: What are activities involved in agile development project?

4) Establishment of scope of each iteration.

6) Integration of user stories with the system.

Q. 56: How do we select the right approach out of Traditional SDLC or Agile?

Selection of the right approach for the successful implementation and completion of a software project depends upon;

Q. 57: What are the similarities of functions of testing teams in Agile and traditional projects?

# Agile projects have great similarity with traditional lifecycles as far as testing is concerned.

# Developer develops features from the user stories and does unit tests.

# Testers then tests these features.
# Business stakeholders also test the stories during implementation.

# Business stakeholders use written test cases, and they just try out the developed features and provide quick feedback to the development team.

Q. 58: What is a hardening or stabilization sprint?

# Hardening sprint or stabilization sprint is an additional sprint which is run by the agile teams at the end of the regular sprints.

# Hardening sprint generally focuses on final integration before the release, teams use them for building functionality based on the product backlog.

# Hardening sprint helps in fixing the loose ends found during earlier sprints, like data issues or defects related to external interfaces and any other forms of technical debt.

Q. 59: Why do agile teams use a hardening sprint?

# Requirement of a hardening sprint is felt by the teams when they approach near the release.

# When the team finds some integration issues pending with previous sprints, or testing could not be done using some of the relevant data, the team is compelled to introduce an additional hardening sprint.

# Sometimes a hardening sprint is planned beforehand itself and the lead time and infrastructure etc. is planned in advance.

# Introduction of hardening sprints is not a good practice.

# Sudden introduction of hardening sprint or a planned buffer sprint is not in line with Agile principles of time-boxed development for creating a shippable product.

# Teams generally complain that by the practice of introducing hardening sprints, total work to be done in the iteration remains unknown and it becomes difficult to estimate the time of completion of the remaining features.

# As per the best practice no feature is considered done until it has been integrated and tested with the system.

# Another good practice is to address defects remaining from the previous iteration at the beginning of the next iteration, as part of the backlog for that iteration (referred to as “fix bugs first”).