When the modules are under the process of development, the developers develop some interfaces and integrate the module with the help of those interfaces. Here integration is the process of assembling unit-tested modules. We need to test the following aspects, which have not been addressed previously while independently testing the modules:

of data that are not exercised during unit testing.Global data structures, if used, may reveal errors due to unintended usage in some module.

Integration Testing falls under the category of white box testing.

Following four approaches are generally adopted by the developers while integrating the modules. 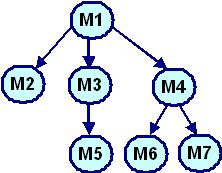 1) Top Down Approach (TDA):
Involves development of all the topmost / parent modules before hand followed by due integration with child modules.

This approach uses a Program called “Stub”. While integrating the modules with this Top Down Approach, if at any stage it is found that some mandatory module is missing, then in such an event that particular module is replaced with a temporary program known as “Stub”. 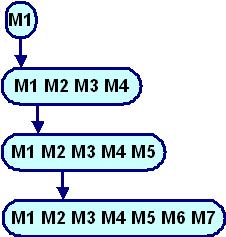 The testing starts with M1. To test M1 in isolation, communications to modules M2, M3 and M4 needs to be simulated by the tester by some means, since these modules may not be ready yet. To simulate responses of M2, M3 and M4 whenever they are to be invoked from M1, “stubs” are created. Simple applications may require stubs, which would simply return the control to their superior modules. More complex situation demand stubs to simulate a full range of responses, including parameter passing. Stubs may be individually created by the tester or they may be provided by a software testing harness, which is a sort of software specifically designed to provide a testing environment.

Advantages of Top down Approach:

b) Early skeletal program allows demonstrations and boosts the morale

Disadvantages of Top down Approach:

a) Stub modules are essential

b) Test conditions my be impossible, or very difficult, to create

c) Observation of test output is more difficult, as only simulated values will be used initially. For the same reason, program correctness can be misleading

2) Bottom Up Approach (BUA):
Involves development of all the elementary modules or child modules before hand followed by due integration with the corresponding parent modules.

This approach uses a Program called “Driver”. While integrating the modules with this Bottom Up Approach, if at any stage it is found that some mandatory module is missing, then in such an event that particular module is replaced with a temporary program known as “Driver”. 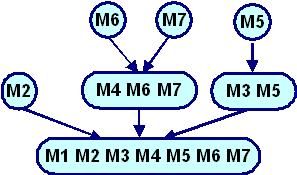 For the above-mentioned Bottom-Up example, drivers must be provided for modules M2, M5, M6, M7, M3 and M4. However there is no need for a driver for the topmost Module, M1.

Advantages of Bottom Up Approach:

b) Test conditions are easier to create

c) Observations of test results are easier since “live” data is used from the beginning.

Disadvantages of Bottom Up Approach:

a) Driver modules are essential>

3) Big Bang Approach:
Once all the modules are ready after testing individually; the approach of integrating them finally at once is known as big bang approach.

Though Big Bang approach seems to be advantageous when we construct independent module concurrently, this approach is quite challenging and risky as we integrate all modules in a single step and test the resulting system. Locating interface errors, if any, becomes difficult here.

4) Hybrid Approach:
To overcome the limitations and to exploit the advantages of Top-down and Bottom-up approaches, a hybrid approach in testing is used. As the name suggests, it is a mixture of the two approaches like Top Down approach as well as Bottom Up approach.

Thanks for the very good explanation.

This site is a jargon of most of the information for Software Testing.
Extremely useful for Certification aspirants and testing interviews.
I suggest, keep updating the site by improving and enhancing the questionnaires.

This site has a very good information about testing.

its quiet useful to every person who is trying to be a tester and also who is working as a tester.it is really benefecial to want to land on testing platform.thanks to authors from my bottom of heart.

one of the best side for knowing abt software testing

very good article and interesting too

One of the best sites on Software Testing with great contents on manual and automation testing. Cheerz

One of the best sites on Software Testing with great contents on manual and automation testing. plz enlage it more