Tutorial-1: What is a Flow Graph and understand its notations

In order to compute logical complexity measure, V(G), of a code, testers perform the basis path testing. The value of V(G), defines the maximum number of test cases to be designed by identifying basis set of execution paths to ensure that all statements are executed at least once.

The process begins with the construction of the flow graph from the source code or flow charts.

The control flow of a program can be represented using a graphical representation known as a ‘Flow Graph’. It consists of nodes and edges. Using the flow graph, an independent path can be defined as a path in the flow graph that has at least one edge that has not been traversed before in other paths.

A set of independent paths that cover all edges is known as a basis set. Once a basis set is formed, test cases are written to execute all the paths in the basis set.
Standard notations used in constructing a flow graph are as under
1) To indicate a Sequence:

5) To indicate a �SWITCH� Statement: 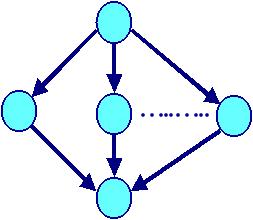 Please, give me an example about this case: Post Test “For” loop