A �Cause� represents a distinct input condition that brings about an internal change in the system. An �Effect� represents an output condition, a system transformation or a state resulting from a combination of causes.

According to Myer Cause & Effect Graphing is done through the following steps:

Step – 1: For a module, identify the input conditions (causes) and actions (effect).

Basic symbols used in Cause-effect graphs are as under: 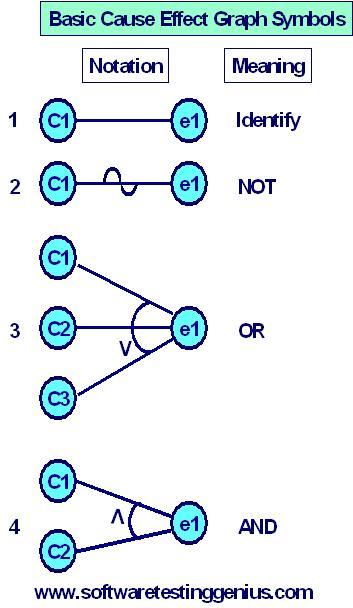 Consider each node as having the value 0 or 1 where 0 represents the ‘absent state’ and 1 represents the’present state’. Then the identity function states that if c1 is 1, e1 is 1 or we can say if c0 is 0, e0 is 0.

The concept of designing test cases can be illustrated through the example of the �Triangle Problem� covered under White Box Testing �Tutorial � 5: Estimation of Complexity Measure V(G) : For a Triangle�.

Going by the Myer methodology, test cases can be designed for the triangle problem in the following way:

Step – 1: First of all we need to identify the causes and its effects.

The causes designated by letter �C� are as under

The effects designated by letter �e� are as under 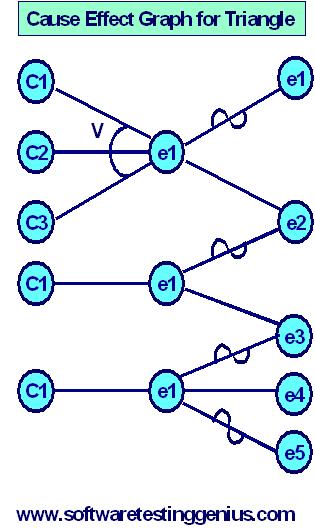 1) If the variables refer to physical quantities, domain testing and equivalence class testing are indicated.

2) If the variables are independent, domain testing and equivalence class testing are indicated.

3) If the variables are dependent, decision table testing is indicated.

4) If the single-fault assumption is warranted, boundary value analysis (BVA) and robustness testing are indicated.

7) If the variables refer to logical quantities, equivalence class testing and decision table testing are indicated.

This content is really useful. One can easily understand Cause-Effect graph testing.