Data flow testing is a white box software testing technique in which test cases are designed based on the definition and usage of the variable within the code i.e. testing of definition-use pair (du-pairs). Data flow testing must not be misunderstood with data flow diagrams, as they don’t have any connection.

Before talking about the data flow testing technique in greater detail, let’s quickly run through different phases for a data item in its normal life cycle as well as understand the types of du-pairs.

Phases of Data Item during Normal Life Cycle: Generally a data item or variable passes through four phases during its normal life cycle, that are;

3) Use phase: During this phase the value of the variable is used.

4) Deletion phase: During this phase the memory reserved for the value of the variable is freed for use elsewhere.

Analysis of “Definition” and “Use” of Variables: Problematic cases in the data flow that causes defects in our program are;

In the context of a flow graph, a “definition” occurs at a node. Thus we can make two statements like;

Classification of Reference of Variables: Generally variables can be referenced in two ways.

1) Computation Data Use (c-use): Here the variable is not used in a condition. For example a variable “v” is used in defining the value of another variable or is used as an output value, then it is a “c-use” of variable “v” in node “n”.

2) Predicate Data Use (p-use): Here the variable is associated with the decision outcome of the predicate portion of a decision statement. For example a variable is used to determine the True/False value of a predicate, and a predicate associates with an edge “e”, then this is a “p-use” of variable “v” in the edge “e”.

Consider the following pseudocode describing the internal structure of the program to determine whether an integer is a composite number. All the decision nodes here have two outgoing edges. Statement “S1” has been included in the diagram because it is an initial statement for variable “t”, which will be used later. 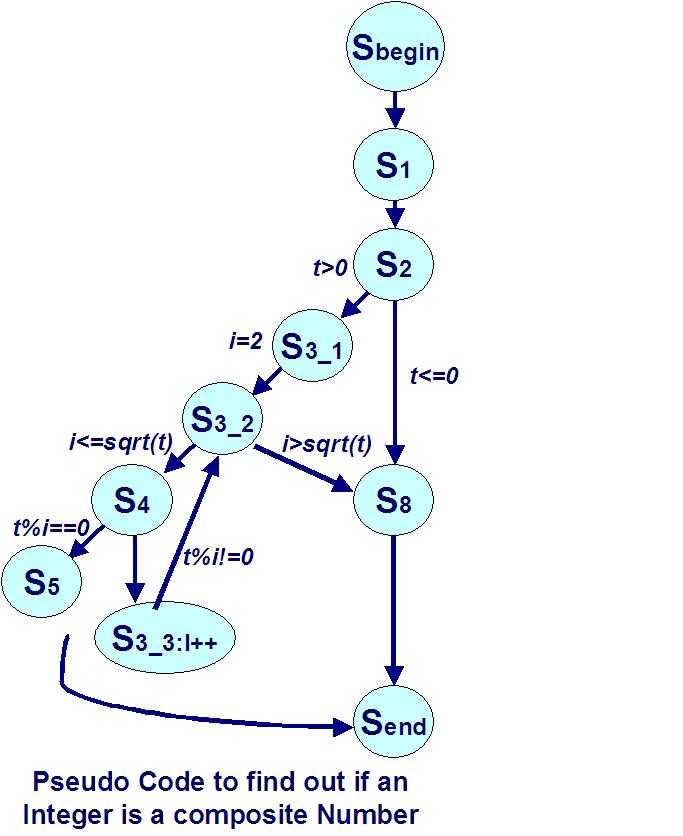 For illustration of the two types of data uses like “p-use” and “c-use”, refer following piece of code;

Based upon two kinds of usage, we have three types of du-pairs like;

Process of Test Case Design using Data Flow Test Technique: While designing test cases with the data flow software testing technique, we concentrate on one component and for that component we carryout the following activities;

When the final test procedures are designed from the test cases, they will of course follow a path in the control flow through the code.

Data flow based criteria for test case creation: Based on the notations of definition, use, c-use, p-use, du-paths, and definition-clear paths, a set of data-flow-based criteria can be used to guide the test-case generation.

When testing a program, determining which criterion to choose is all about the balance of the cost and defect-detecting ability. Following figure describes a typical hierarchy of different test-adequacy criteria. 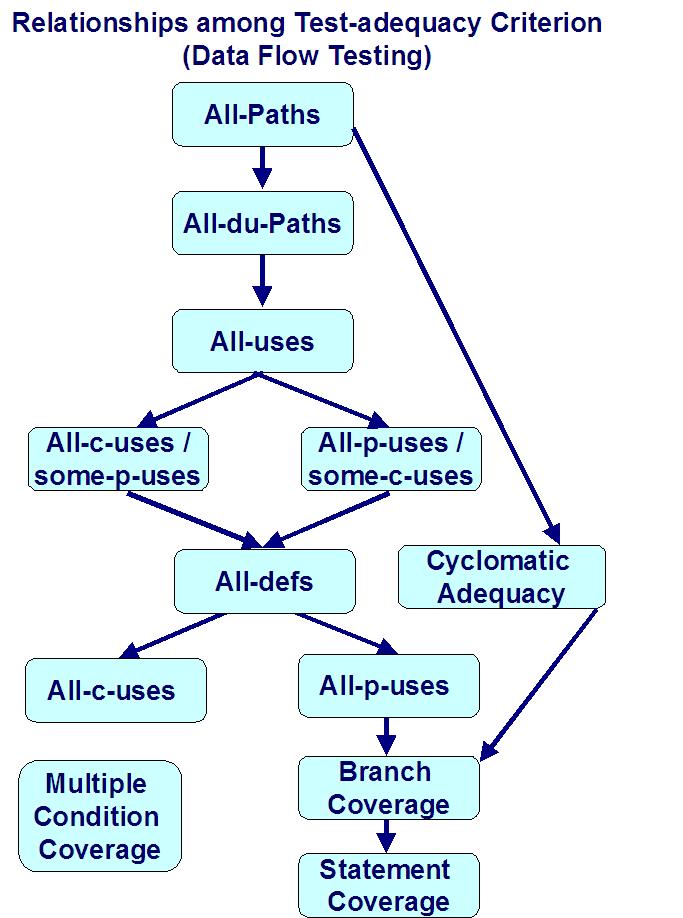 Criteria 2: A test suite “T” satisfies criterion of “all uses” if and only if for each & every variable “v”, “T” consists of “definition – clear paths” from every node that has a definition of “v” to all nodes that have “c-uses” of “v” and to all edges that have “p-uses” of “v”.

For remaining two criterion, “all-c-use” and “all-p-use”, we just ignore the cases where there are no feasible “definition-clear-path” scenarios.

For the “all-use” criteria, all definition and use pairs are tested, but there can be more then one path between the “definition” and the “use” of a variable. Therefore, a more stronger criterion � “all-du-path” criterion needs to be considered.

Similar process can be adopted to obtain a limited-number of “definition-clear path” in this case as well.

Problematic issues with Data Flow Testing: There are a few pitfalls here that we need to be cautious.

1) When we use array variables or pointer variables in the program, it is a bit difficult to conduct precise data-flow analysis. Data items or variables may be composed of many single variables.

For instance, in the case of arrays, which are ordered sequences of individual data items; If we ignore the constituents of composite variables like arrays and treat them as one data item, we greatly reduce the effectiveness of data flow testing. Testing tools will typically respond to an array or record it as a single data item rather than as a composite item with many constituents.

2) Sometimes static analysis tools report a large number of anomalies that are not in fact caused by anything being wrong. These “false alarms” are liable to hide the real problems in the wake of large number of alarms.

3) Cost of conducting data-flow testing is quite higher compared to another white box testing technique of path testing.

Quite nicely explained concept made clear. Please send me some live exmple or case study as need to sumbit that in my organization. Thanks in advance.

can you explain similarities of data flow with Path testing? I think it is not much.