The execution of system test follows the completion of the entire component integration testing. Meaning thereby – the test object is the fully integrated system. 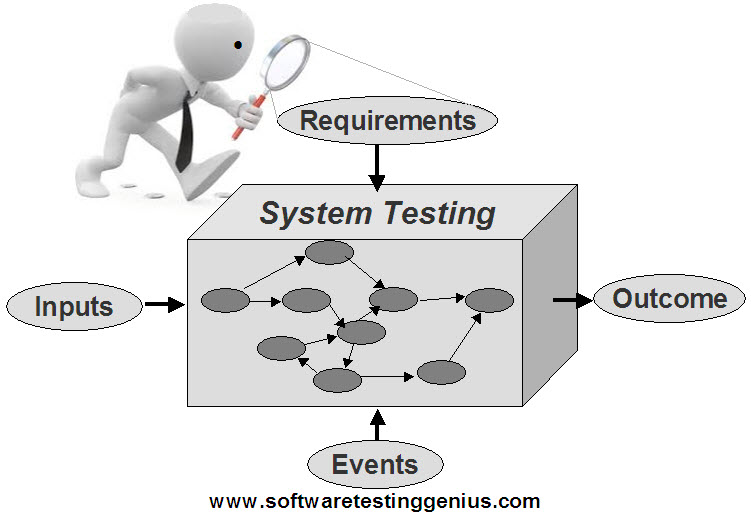 Process of Conducting System Testing
System testing is carried out by the software testing engineers against both functional & nonfunctional requirements.

In some situations, several quality attributes like configuration, performance, security, stress, reliability, recovery, & usability are to be tested. However, since not all types of systems undergo such thorough testing, this article covers 3-categories of the most frequently conducted system testing:

2) Performance & Load Stress Testing:
The objective of the performance & load stress testing is to verify whether the system continues to function correctly under nominal & extreme loads, & whether the response time under those loads is satisfactory. The load is the amount of work performed by a system, & in testing it is expressed as a series of inputs to execute a group of transactions.

Performance testing focuses on fine tuning system response time & throughput under its nominal loads. Load stress testing, on the other hand, concentrates on creating extreme conditions that would break the system due to the resource exhaustion.

3) Security Testing:
Security testing involves designing & executing tests to expose possible application vulnerabilities to intentional & unintentional system security violations. The focus is on those segments of code that are responsible for protecting access to the system & where sensitive data is stored.

Why should we do the system testing?
System testing is necessary to verify both the functional & quality requirements of the application before it undergoes acceptance testing &, more importantly, before it is deployed. Since system testing requires a large amount of resources, this might be the first time that all system components are tested together & on various target platforms. Problems like resource limitations, data overflows, & other external constraints might not come to the notice of software testing engineers until this phase, & hence they should be a focal point of system tests.

For instance, if an online library catalog must be able to add new users, login existing users using user name & password, & perform various types of searches, all these features should be exercised during system testing. All functional requirements should be verified for both valid & invalid inputs. Black box testing techniques like equivalence class partitioning & boundary value analysis should be used to narrow down the number of required tests.

To properly conduct performance testing, its requirements have to be articulated explicitly & they should be quantifiable. For instance, the requirements could state: �The system should be able to handle at least 15 transactions per second,� or �An average response time of a search shall be less than 2 seconds.� In order to verify these requirements, performance is essentially measured under nominal system conditions.

Good software testing engineer tries to probe the answers of following 5 questions to define the nominal conditions of the system.

Q.1: How many users should be able to access the application simultaneously?

Q.2: How much data is expected to be processed?

Q.3: Will the load be distributed among multiple systems?

Q.5: Is the application able to cope up with short periods of over activity?

Security tests should cover equivalence class domains for valid & invalid password inputs, test for known encryption weaknesses, & check for trap doors & Trojan horses. For authorized access, security tests should also verify the levels of authorization for protected data. For instance, in a hospital patient record system, a staff member responsible for making appointments should be able to take out the patient�s visit history but not medical records. Additionally, security tests should look for ungraceful system degradations due to resource constraints, like a limited number of memory or network connections. Such ungraceful degradation might provide an application entry to unwanted intruders or hackers.

If a failure is observed during system testing, it becomes the first & foremost duty of the software testing engineers to pay an immediate attention to it & assess the severity of the problem.

What should be measured during system testing?
Software testing engineers essentially calculate / measure the following:

1) Calculation of total number of system functional tests & the number of tests that passed & failed per use case.

2) Calculation of the ratio of the passed tests to the total number of tests. With the exception of noise, which reflects false positive results due to, for instance, obsolete data in a tested record, the system functional testing pass rate should approach 100%, & this value is essentially used as a test progression criterion to move to acceptance testing.

4) Measurement of the system throughput under stress loads. For a new system, the load & performance test criteria can be passed after a sufficient number & range of tests that exercise realistic usage for the entire application have been developed & executed producing acceptable response times, without negatively affecting system functionality.

5) Measurement of the security test pass rate & unless its value is 100%, testing should not move to the acceptance level.

If the results of these tests are collected over an extended time & compared against a baseline, undesired performance drops can be easily detected & eliminated as soon as they are introduced. For instance, before adding the security layer to a module, performance testing should be conducted & the results should be saved as a baseline.

Performance & load stress testing can be automated by using load generators. Load generators simulate system interactions by using patterns similar to realistic use cases. They continuously access the application & automatically record system response as a function of a tested load.

3) It is better to perform a static test on the requirements specification & on the system test specification before execution starts.

4) Collect all measures of time spent on the testing, on faults found & corrected, & on coverage.

5) Stop the system testing when the completion criteria specified in the plan have been met.

6) A system test report must be produced on the completion of the system testing.

I have successfully cleared ISTQB CTFL exam by preparing the articles and sample question papers thoroughly. Especially the question bank really helped me a lot. Thank you Softwaretestinggenius. Keep it up.