Suitable Stages for Implementation of Test Automation in SDLC

Suitable Stages for Implementation of Test Automation in SDLC

These days when tools & technology are available in abundance, automated testing is considered the prime resource to improve the efficiency of any software testing process.

Sound planning, clear definition of roles of people involved in automated testing, adequate tools, their implementation & control are essential for the success of the automated tests in an organization.

Automated testing tools must not be misunderstood as replacement of testers, nor they will make their work simpler. Actually their effort will be redirected to essential activities of the test automation process. That is why, it is essential to groom up the group, because the success of automated testing depends predominantly on their skills.

Test-Stages Automation:
When the automation can not be applied to the entire test process, it can be conveniently used to execute the punctual tests. This occurs normally with some types of tests � like load and performance tests; simply because they are truly difficult to be performed without the help of a tool, requiring big effort and many computational 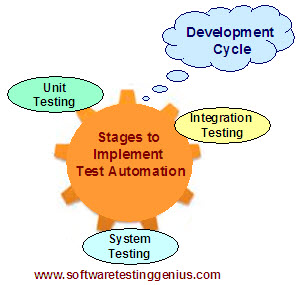 Broadly the test automation can be applied to the three stages like: unit, integration, and system wide.Each of these stages has peculiar characteristics and is implemented in a different way.

Unit tests consist of testing components individually. The software testing engineer verifies the input domain only for the unit in question, ignoring the rest of the system. These tests require code construction executed during depuration mode.

The software developer has the responsibility to ascertain that units are correctly constructed, analyzing code, comparing it with the system’s specification and checking if any functionality is missing or was not completely developed.

Tests and error corrections may be made at any stage of the software development cycle. Nevertheless, some experts declare that the cost of searching and finding errors increases while the development advances. It is cheaper to fix defects during the codification stage.

2) Define input domain based on requirements and use cases.

3) Define, for every input, expected output based on requirements and use cases.

4) Implement components to be tested.

8) Fix component tested, if there is an error.

9) Execute step 8 while any error remains.

3) Destruction of variables, including the cleaning up of data input to the database.

4) Comparison between results of applied function with expected results, failing in case they differ.

Grouping unit tests forms a tree, where the leaves consist of the unit tests and in the other nodes are the groupings of unit tests. This technique allows automating and executing all tests, a subset of them, or each one individually.

Integrated tests are performed to test various parts of the system (components, modules, applications, etc.) that were separately developed in a set. Integration tests are executed after each of the system’s parts has been tested individually, using unit tests or systemic tests, in case of applications that communicate (with each other).

Analyzing the time line, software testing engineer can notice that integrated tests are mainly performed after a unit test and before systemic tests, normally are executed by developers that create their own builds and test integrates units or by a specialized software testing team.

2) Identify test cases based on requirements and architecture.

3) Detail procedures for each test case.

6) Analyze results. If errors are found, they must be registered in the problem reports tool and associated to people responsible for the corresponding corrections. If none are found codification may stop.

8) Execute tests again. After ending it, return to step 6.

In this stage a test environment, compatible with the one in which the system or program will be used, is necessary.

Various test types are performed during this stage: usability, functionality, performance, stress, and so on. Some of these may be automated to make execution more agile, especially in case of regression tests.

System wide tests can be automated in many ways, but a list follows with their basic activities:

7) Analyze results. If errors are found, they must be registered in the problems report tool and associated to people responsible for the corresponding corrections.

10) Execute tests again, returning to step 6 after finishing them.
Many More articles on Test Automation Frameworks

Automated Testing should be at the end of the Testing Lifecycle. Rather spend the early stages doing manual testing.