Storyboard Testing is a versatile feature that provides all the capabilities of IBM – Rational Functional Tester (RFT), but displays them in a manner that is easier to adopt and more productive for nontechnical users. It simplifies the test creation and visualization process to a great extent. We can effortlessly record, play back, and edit our scripts using Storyboard Testing.

Storyboard Testing is a

new, visual approach to automated test script creation. It provides the tester with a new visual representation of test script actions. The new storyboard testing view is just an overlay of the Java test script in its new form.

A 3-pane view of the test offers the following:

1) A natural language description of test actions
2) A screenshot view of the screen being tested, with control highlighting to further indicate the control being used
3) A storyboard view of the script flow, showing thumbnails of all screens accessed during the test in sequential order

To enable Storyboard Testing, first open the Preferences dialog box by clicking Window > Preferences. In the dialog box, expand Functional Test in the left navigation pane, and then click Simplified Scripting, as shown in following figure. Finally, click the Apply button to save this preference. If we have no other preferences to change at this time, we can click the OK button to close the dialog box. Overall, test automation required too much skill in programming. Subject matter experts needed an easier way to create test automation, one that would not require them to become developers.

RFT offers this in a easier way. Storyboard Testing enables nontechnical users to see their scripts in a human language instead of in a programming language.

This preference has no effect on scripts that already exist; RFT stores the type of script (Storyboard Testing or traditional) with the script, and opens the appropriate views in the Functional Test Perspective. We can edit Storyboard Testing scripts alongside traditional scripts within the same running instance of RFT and as we switch between the different script types. As we select a different type of script, the Functional Test Perspective changes the views to match the type of script being edited. 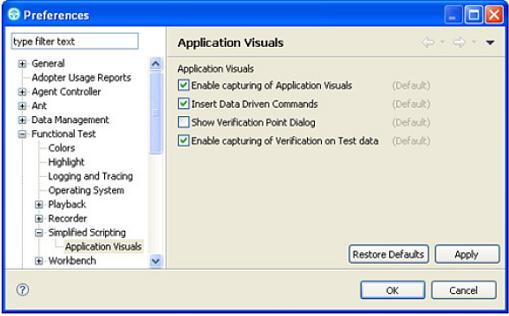 If this preference is unchecked, the other preferences are not available.

Insert Data-Driven Commands:
If we select to insert data-driven commands, a datapool is associated with our script during recording. As we interact with objects during recording, we can add the objects to the datapool as columns, and the statements include actions to retrieve the data from the datapool instead of using the data we type.

Enable Capturing of Verification on Test Data:
Select the check box to enable the option to capture verification on test data, and during recording, RFT will capture and persist all the verification point data associated with the object available on an application under test page. This will allow us to insert Data Verification Points using the application visuals displayed in the Application View.

2) The natural language steps together with the screenshots provide testers with an easy way to understand the test flow. Test editing can be done from this view as well.

3) We can insert verifications, data driven commands and even Java code from this perspective.

4) Users already familiar with RFT are able to work as they always have, directly with the test script.

5) The new method of testing accelerates the test creation by making it simpler to read and edit tests as well as open up test automation to those who were previously intimidated by having to work with test script code.

6) Enables non-technical quality professionals to collaborate in the quality process by leveraging RFT’s Storyboard Testing capability, where test actions are represented in a visual storyboard format.

7) Using the storyboard, novice and professional software testing engineers alike are easily able to communicate and understand their test flow as well as edit their test actions without ever having to read or write a single line of test script code.

Thats a great article on RFT. Its been so long since I was searching for a good website having lots of stuff on RFT and my wait has ended here. Hats off to you!!