This is Part 11 of 35 containing 5 Questions (Q. 51 to 55) with detailed explanation as expected in ISTQB Foundation Level Exam Latest Syllabus updated in 2011

Q. 51: What is the general program structure of a pseudo code?

Code can be of two types, executable and non-executable.

For example, reserving space to store a calculation (this is called a declaration statement) involves no actions.

In pseudo code non-executable statements will be at the beginning of the program; the start of the executable part is usually identified by BEGIN, and the end of the program by END.

So we get the following structure:

If we were counting executable statements we would count lines 2, 4 and 6. Line 1 is not counted because it is non-executable. Lines 3 and 5 are ignored because they are blank.

Q. 52: In how many ways we can structure the executable code?

Once we have a picture of an overall program structure we can look inside the code. There are only following three ways that executable code can be structured.

1) Sequence: The first is simple & here the statements are exercised one after the other as they appear on the page.

Following is an example of a purely sequential program

The BEGIN and END have been omitted in this case since there were no non-executable statements; this is not strictly correct but is common practice, so it is wise to be aware of it and remember to check whether there are any non-executable statements when you do see BEGIN and END in a program. The computer would execute those three statements in sequence, so it would read (input) a value into A (this is just a name for a storage location), then read another value into B, and finally add them together and put the answer into C.

Following is an example of a Selection program

There may not always be an ELSE part, as below:

3) Iteration: It simply involves the computer exercising a chunk of code more than once; the number of times it exercises the chunk of code depends on the value of a condition (just as in the selection case).

Iteration structures are called loops. The most common loop is known as a DO WHILE (or WHILE DO) loop and is illustrated below:

There is another variation of the loop structure known as a REPEAT UNTIL loop. It looks like this:

Q. 53: What is the purpose of creating flow charts?

After we are able to write code we go a step further and create a visual representation of the structure that is much easier to work with. The simplest visual structure to draw is the flow chart, which has only two symbols.

To create a flow chart representation of a complete program all we need to do is to connect together all the different bits of structure.

Example of a Flow chart for a sequential program

Example of a Flow chart for a selection (decision) structure 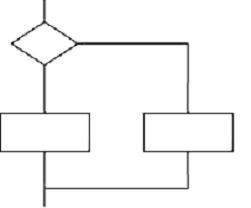 Example of a Flow chart for an iteration (loop) structure 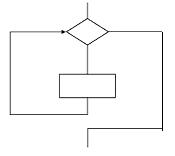 Q. 54: What is the purpose of making Control Flow Graphs

The graph itself is made up of two symbols: 1) Nodes and 2) Edges.

1) A node represents any point where the flow of control can be modified (i.e. decision points), or the points where a control structure returns to the main flow (e.g. END WHILE or ENDIF).

2) An edge is a line connecting any two nodes. The closed area contained within a collection of nodes and edges, as shown in the diagram, is known as a region.

We can draw �sub-graphs� to represent individual structures. For a flow graph the representation of sequence is just a straight line, since there is no decision to cause any branching.

The sub-graphs show what the control flow graph would look like for the program structures we are already familiar with.

Q. 55: What are the basic steps involved in drawing a control flow graph?

Step-1: Analyze the component to identify all control structures, i.e. all statements that can modify the flow of control, ignoring all sequential statements.

Step-2: Add a node for any decision statement.

Step-3: Expand the node by substituting the appropriate sub-graph representing the structure at the decision point. Any chunk of code can be represented by using these sub-graphs.

Step 1: breaks the code into statements and identifies the control structures, ignoring the sequential statements, in order to identify the decision points; these are highlighted below.

Step 2: Adds a node for each branching or decision statement as shown in following figure. 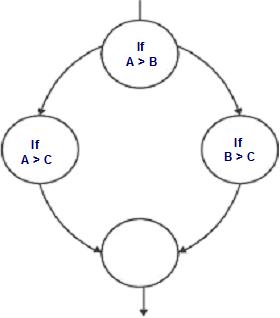 Step 3: Expands the nodes by substituting the appropriate sub-graphs as shown in following Fugure 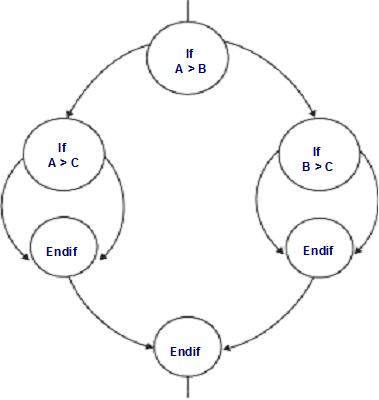