What are Decision Tables?

Decision tables are precise and compact way to model complicated logic. They are ideal for describing situations in which a number of combinations of actions are taken under varying sets of conditions.

It is another popular black box testing. A decision table has following four portions 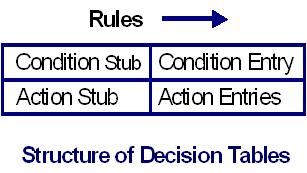 Following steps are used to identify the test cases with decision tables:

Step – 3: Transform this cause-effect graph, so obtained in step 2 to a decision table.

Each column of the decision table represents a test case. That is,

For a limited entry decision tables, if n conditions exist, there must be 2n rules.

What are the Advantages of Decision Tables:

1. This type of testing also works iteratively. The table that is drawn in the first iteration, acts as a stepping stone to derive new decision table(s), if the initial table is unsatisfactory.

2. These tables guranatee that we consider every possible combination of condition values. This is known as its “completeness property”. This property promises a form of complete testing as compared to other techniques.

3. Decision tables are declarative. There is no particular order for conditions and actions to occur.

What are the Disadvantages of Decision Tables:

Decision tables do not scale up well. We need to “factor” large tables into smaller ones to remove redundancy.

(b) Logical relationships among input variables.

To identify test cases with decision tables, we interpret conditions as inputs and actions as output. The rules are interpreted as test cases. Because the decision table can mechanically be forced to be complete, we know we have a comprehensive set of test cases.

Guidelines for Decision Table Based Testing:

The following guidelines have been formulated after studying above examples

1) This technique works well where lot of decision making takes place such as the triangle problem and Next date problem.

2) The decision table technique is indicated for applications characterized by any of the following > Prominent if-then-else logic.

# Cause-and-effect relationships between inputs and outputs.

3) Decision tables do not scale up well. We need to ‘factor’ large tables into smaller ones to remove redundancy.

4) It works iteratively meaning that the table drawn in the first iteration, acts as a stepping stone to design new decision tables, if the initial table is unsatisfactory.

Thats a fantastic article on Decision tables Yogindernath. You are doing a fantastic job indeed.

Thanks for the great feedback Reema.

For the steps to identify test cases of decision table, we can skip the step 2: Develop cause-effect graph, and directly go to step 3.

where I can locate decision table approach to a salesman commission problem in your articles on black box testing ? Thannks for very useful information on software testing.
Bye / Sudhindra M