Every tester, may be a novice or an expert, aspires to move on his/her career progression path leading to the position of a Test Manager.

The career progression path shown in the following figure though appears a bit long, yet testers having zeal to accomplish the difficult are able to cross effortlessly in a shorter span. So you too can. 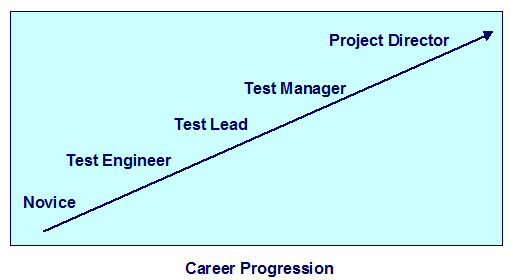 Attributes & skills that that ideally good software testing engineers should have are the ones described below. After careful examination you will realizes that the attributes & skills are very important but are difficult to find in any single person. At the same time it is necessary to understand that not all testers need all the skills described below because there are some skills that are not required as much at certain levels of test. For instance, programming skills are very essential for unit testers, but may not be that much essential for acceptance testers.

Try to introspectively figure out honestly which of the following attributes you possess as a software testing engineer. Don�t get discouraged if you happen not to have few of them, as said earlier that none can have all of them.

1) Are you a positive critic of the work done by the developers?

2) Do you have a technical background, but don�t wish to be a developer?

3) Do you have a understanding of the software development lifecycle

4) Do you have functional / business knowledge?

5) Do you have a testing experience?

6) Do you have knowledge of some specific tools?

7) Do you have some degree of political maturity?

8) You don�t pretend to know things you don’t.

9) Do you have investigative skills & ability to effectively communicate your findings?

10) Do you have the ability to speak courageously on the matters of principle?

11) Do you have the willingness to put in extra hours when your project happens to demand an extra push?

12) Do you understand & value your integrity that will help you in building your competence?

13) Do you have inquisitive nature?

16) Do you have a pleasing personality? Even if you don�t have one, try to develop it gradually.

19) Are you flexible in your approach?

20) Are you a self-reliant person?

21) Are you a self-starting person?

22) Do you have a positive attitude?

24) Do you have the stamina to handle the stress well?

26) Do you have fair amount of sense of humor?

27) Do you allow others to know when you find value in their work?

28) You don�t tend to become arrogant when you find poor work from others.

29) Do you demonstrate sensitivity, appreciation, and diplomacy while dealing with peers?

30) Do you have ability to report bugs step by step, without unnecessary steps?

31) Do you base your judgments on the actual observed behavior of the product?

32) Do you demonstrate what you did to reproduce a bug in the event of a failure being irreproducible?

33) You don�t exaggerate your bug reports & don’t even minimize them?

34) You don�t tend to act like a cop punishing developers for doing mistakes, missing timelines & failure to follow the process.

35) Do you have an ability to design effective tests for difficult & critical bugs?

When testers with instinct of natural leadership gain sufficient experience, skills & maturity while marching on their career progression path, they look forward to acquire certain skill set that good project leads & software testing managers ought to have. Few of these skills / roles are described here.

Interpersonal Roles of a Test Manager:

Due to the peculiar nature of the testing software, the testing manager needs to coordinate & work with different people among the own company as well as with people from several other companies. Following figure describes few of the people with whom the test manager needs to interact regularly. 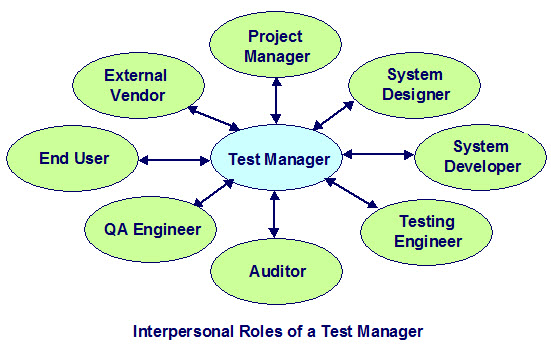 Interpersonal role that a test manager generally plays is, of a leader, well-wisher & implementer of the mission of the company as described in the following figure. 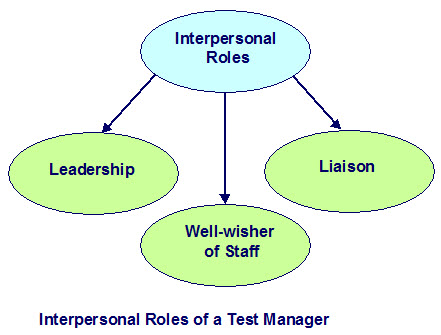 Informational Roles of a Test Manager:

The test manager is in a position to present information on a daily basis. He or she will be expected to provide status reports, plans, estimates, and summary reports. Additionally, the test manager must fulfill a role as a trainer of the testing staff, upper management, development, and the user community. In this role, the test manager will act as the spokesperson for the testing group. 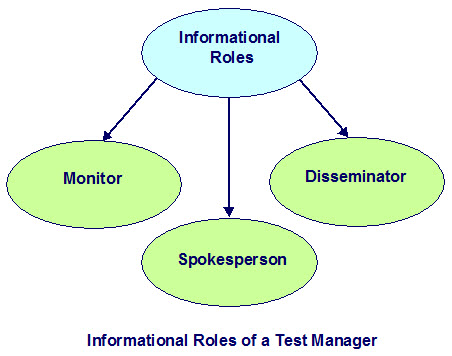 Decisional Roles of Test a Manager:

Test managers take several decisions every day, which may relate to:

1) Which tester should get a particular assignment?
2) Which tool should be used in a particular situation?
3) Whether the teammates should be deputed to put in some extra work?
4) What needs to be done at the conclusion of testing.
5) Whether the software should be released or further testing should be done?
6) Likewise many such decisions 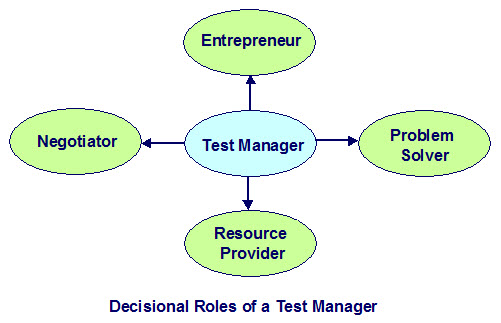 Novice testers need more support & attention from their superiors like team leads & test managers. Good leads handle their software testing engineers as executives according to their aptitude & strength. They treat these young executives as learning & quick thinking professionals ready to build new skills with enthusiasm. Once these executives get developed as matured professionals the entire testing teams get benefits out of their skills.

You can be called effective test manager if you have few of the following qualities:

1) Do you communicate with all the people within & outside of the team effectively?
2) Are you honest towards yourself & your team mates?
3) Do you have the courage to admit your mistakes in making judgments?
4) Are you consistent and predictable?
5) Whether your teammates have trust in your ability to lead your team during tough times?
6) Have you created an open & honest environment around you that your team mates feel comfortable in it?
7) Do you treat your teammates with a sense of equality & make judgment based upon their work performance only?
8) Do you represent consistent procedures & clear policies?
9) Are you absolutely clear about your expectations from other departments?
10) Do you explain the importance of overall company goals & expectations of your department to your teammates?
11) Have you installed a mechanism on flow of information down from you & up to you for making informed decisions?
12) Do you keep most of your business meetings for duration less than one hour?
13) Do you keep yourself fully informed by careful scrutiny of status reports from your group?
14) Do you remain constructive while commenting on the job performance of your subordinates?
15) Do you care for the things your team might have missed?

Many More Articles on Career Building in Testing